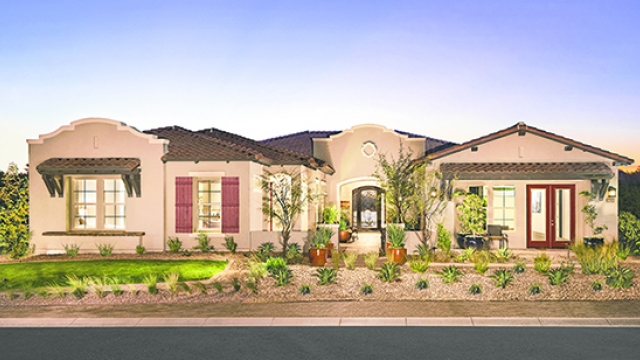 Most buyers have a preference when it comes to building a single-story or a two-story home — often it’s the square-footage, the floorplan configuration or the privacy factor that influences the decision.

Fortunately, builders are meeting the individual needs of buyers by offering both options in communities across the Valley.

Many builders agree that a single-story home is a popular choice for today’s buyers.

“We sell a lot more single-story homes than two-story homes,” said Dennis Webb, vice president of operations for Fulton Homes. “Generally, one-story homes are more prevalent with Baby Boomers and empty-nesters who want to live on one level and avoid stairs.”

Some Fulton Homes communities exclusively offer single-story homes that range in size from 1,500 square-feet to 3,000 square-feet, mainly because privacy is a big draw for these buyers.

“In single-story communities there aren’t two-story neighbors adjacent or behind the property,” Webb said. “The 6-foot wall around the perimeter also adds privacy.”

In communities that feature both options, builders often section-off areas that are then designated solely for single-stories or for two-stories.

“We look at our buyer profile to determine if we will build single-story or two-story homes,” said Dan Rhea, project manager for Toll Brothers. “Single-stories are popular among permanent residents, second-home buyers and seasonal residents who want to build a nice-size home and still have views of the mountains, a golf course or the Sonoran desert.”

In condominium communities such as Serenity at Fulton Ranch in Chandler, single-story properties are offered on both the first and second level. However, some buyers in these communities — who are typically active professionals, vacation buyers, seasonal buyers or move-down buyers — prefer the second level.

“These buyers can capture a great view, they like the security of being off the ground and can appreciate that there is no one living above them,” said Keith Mishkin, president and broker for Serenity Development and Cambridge Properties. “Most of our buyers want single-level living because these floorplans are more efficient and often feel bigger.”

While not quite as popular as the single-story, plenty of buyers are purchasing two-story homes.

“The footprint is smaller in a two-story home so buyers typically get more square-footage and can have a larger backyard,” Webb said. “We feature as many as eight bedrooms in our two-story homes.”

In October, Fulton Homes opened Union Pacific at Cooley Station, a two-story community in Gilbert. Generally featuring between 2,000 square-feet and 4,000 square-feet, two-stories at Fulton Homes typically offer a master bedroom on the first level but there are many different floorplan configurations available. “This option usually works out well for buyers who are looking for more space,” Webb noted.

Two-story homes also can offer an economic incentive for buyers because construction is vertical instead of horizontal — reducing the need for more land — which can sometimes make two-story homes more attractive to buyers with children or multigenerational families, Rhea said. “It’s a more affordable option to maximize the square-footage,” he added.

Even with large entry areas and loft space, two-story homes are energy-efficient, which is important to buyers.

“Two-story homes that are built today are much more energy-efficient even compared to five years ago,” Webb said. “The lower the Home Energy Rating System (HERS) score, the better insulated the home is.”