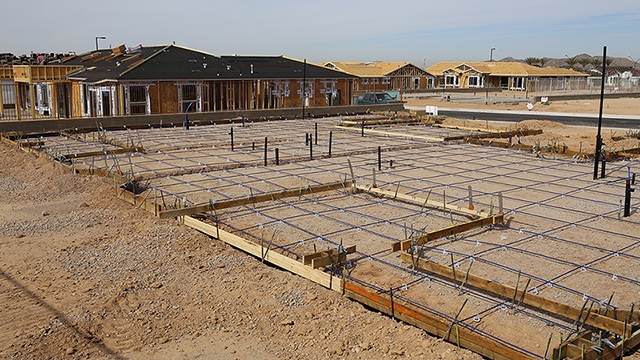 Just as with anything else in life, your new home needs a solid foundation.

Prior to 2003, new-home foundations were conventional, generally with a footing around the perimeter of a house to include a two-foot trench. However, most new homes in the Valley now feature a more modern type of foundation called a post-tension slab.

“A post-tension system is basically a slab seven or nine inches thick,” said Bob Brown, owner and president of Arizona Foundation Solutions, a Phoenix-based company that provides foundation inspection analysis and repairs foundations. “The system has steel cables that go through the concrete in a checkerboard fashion.” After the concrete is poured, the cables are pulled very tight and bolted and the excess is cut off. The cables remain in the concrete and hold everything together.

Eric Williams, sales manager at Blandford Homes in Gilbert, described the post-tension slab as a cable within a sleeve, to be tightened after it is poured, allowing for some slight movement thus helping to prevent it from cracking.

It’s in the soil

“Soil makeup will determine how thick the post-tension design needs to be,” according to Dennis Palmer, vice president of operations for AV Homes, Arizona Division.

Because much of the land in the Phoenix metropolitan area is flat and the climate is temperate there is not much issue with the freezing and thawing conditions that affect many other parts of the country. Therefore, concrete slabs are safe and cost-efficient, according to Palmer.

On another soil-related note, Palmer also said that homeowners should make sure they have proper drainage in their yards so that water does not settle against the foundation. “Water underneath the foundation plays havoc with soil itself,” Palmer said. “That’s something soils engineers look out for as well.”

The purpose of a home’s foundation is to prevent the home from moving. It supports the structural load of a house, according to Brown. “It is designed to keep it sturdy and level,” he said, adding that however “concrete cracks no matter what. I don’t get too excited about cracks by themselves. It has to indicate some sort of movement in order for it to be significant.”

When there are cracks in the walls it typically means the footing is moving below. “Footing movement is what we pay attention to,” Brown said. “Not footing cracks.”