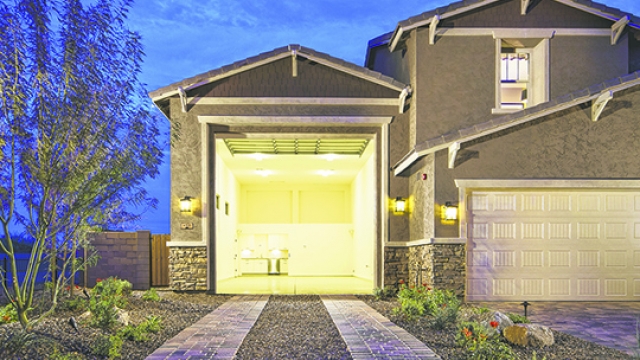 Until fairly recently, accessory garages were limited to communities without homeowner associations (HOAs), where lot sizes afforded enough space to build the structures and still meet setback requirements. Older homes and custom new-builds on larger lots were the most likely to feature these super-sized garages.

Seeing an opportunity to attract a new category of homebuyers, new-home builders began adding the garages in select communities. Buyer response has been positive, particularly among Arizona’s outdoorsy set.

So what’s the typical buyer profile? It turns out it’s a pretty broad one, ranging from families with young children, to RVing retirees and everything in-between. The most common denominator is an interest in outdoor activities and ownership of at least one motorized recreational toy.

Jamie McAndrew, Phoenix division vice president of sales for Meritage Homes, cites easy access to outdoor leisure spots — like Lake Pleasant in the Northwest Valley — as draws for many buyers.

“The west side of town is starving for the accessory garage feature,” he said. “There is so much to do in terms of outdoor activities — lakes, dirt bike trails and a lot of people with motorhomes. The garages are especially appealing to those who don’t want the hassle and expense of storing their stuff offsite. Being able to work on their toys at home is another selling point.”

Catering to this pool of buyers is relatively new ground for new-home builders.

Fulton Homes currently offers accessory garages in two of its East Valley communities. According to Dennis Webb, the company’s vice president of operations, the trend comes on the heels of more than two decades in which three- and four-car garages were all the rage.

“Three-car garages were popular for about 25 years, then came the four-car garage,” Webb said. “Fulton Homes got into the RV garage category about three years ago.”

Availability of accessory garages remains limited. In addition to being a relatively new concept in the new-home market, space and zoning requirements play a role. Bob Thompson, sales manager for Taylor Morrison, said that larger home lots are needed to accommodate the garages whether they are attached to the home or built as a separate structure.

“You need a minimum of about an 18,000-square-foot lot,” Thompson explained. “We’re building the garages on homesites ranging from that size all the way up to one acre.”

To put that into perspective, typical lots for new homes that do not offer accessory garages generally average in the neighborhood of around 10,000 square-feet.

As with most things, the cost, style, size and special options offered for accessory garages varies from builder to builder.

Taylor Morrison’s accessory garages, which start at around $35,000 and average about 720 square-feet, are free-standing structures placed toward the rear of the lot or off to the side, depending on the individual homesite. Accessory garages by Fulton Homes and Meritage Homes are attached to the house. Both builders offer garages as large as 1,000-square-feet, which McAndrew says is big enough to fit a full-size batting cage.

Some of the options and special features builders offer for accessory garages include air conditioning, bathrooms, kitchenettes, plumbing for sinks and hose bibs, wider and taller doors, rear doors, utility hookups and even on-site dumping to drain a recreational vehicle’s blackwater and greywater directly into the home’s sewer system.

Through an exclusive collaboration with Southwest Gas, Fulton Homes is the only new-home builder in the state offering a compressed natural gas (CNG) filling station option.

“It’s the same gas that’s used for gas grills, fireplaces and ranges,” Webb said. “CNG is less expensive than gasoline, burns cleaner and is easier on the engine. Having a filling station in your garage means you never have to go to the gas station.”