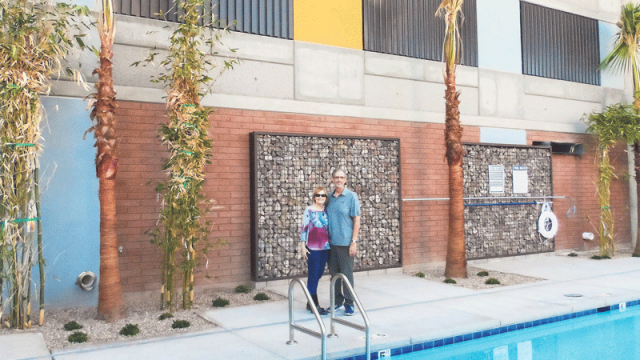 Greater Phoenix is becoming a leading destination for those who want to purchase a condo as a second home. Jeffrey Jacobs learned first-hand about 12 years ago why that’s the case.

“Beautiful weather and so much to do here,” said the lawyer from Portland, Oregon who will retire full-time in downtown Phoenix in less than a month. He and his wife Cheryl lived in East Mesa for a few weeks each year between 2004 and 2009; they liked the Valley so much that they have chosen the metropolitan area as their year-round retirement destination.

But instead of East Mesa, they’ve selected an urban condo development called Portland on the Park (“We love the name,” Jacobs said) in downtown Phoenix, because it’s so similar to the area where their condo in Portland [Oregon] is located. Indeed, Phoenix seems to be an ideal location for those whose primary residence will be here as well as for those who will only spend part of the year in the Valley.

“About 20 years ago, our neighborhood in Portland [Oregon] was a gritty old railroad district. Today it’s filled with high-rise condos in the heart of an arts district,” Jacobs said. “What attracted us — besides the name of the Phoenix community — is that the same kind of transformation seems to be happening here. Something exciting is happening in this part of town.”

He said for just about the same money they paid in Oregon for a 900-square-foot condo, they’re getting a 1,300-square-foot, two-bedroom condo here with a beautiful city view on the eighth floor of a 14-story tower. They’re hoping to move in to their brand-new unit in February.

Although their two grown sons live in the Southwest Valley, the couple is opting for an urban lifestyle because they love being near light rail, sports venues, restaurants and shopping. “And we’re only about 20 miles from each of our kids,” he said, adding that one son — a pastor and an Air Force Reserve chaplain — lives in Verrado [in Buckeye] with his family, while the couple’s other son and his wife live in Avondale. “It doesn’t take that long to drive to either of them and we still enjoy an urban lifestyle,” Jacobs said. “We can walk or take the light rail to almost anywhere we want to go on a regular basis.”

Jacobs captures all of the advantages of living in a downtown urban core, especially in the view of buyers from out of state, said David Newcombe, a principal with Launch Real Estate who handles sales at Portland on the Park. He said the weather in the Phoenix area obviously makes the Valley a top choice for out-of-town buyers, but it’s much more than that.

“It’s mass transit that helps city-dwellers in the majority of major urban areas get around and gives urban cores much of their appeal,” Newcombe said. “And the emerging individuality of downtown Phoenix is an extremely strong sales tool. The character of the arts district and expanding options for dining and entertainment are other compelling draws for prospective condo buyers considering downtown as their new neighborhood. Culture, sports and restaurants are unique there but feel familiar.”

Newcombe estimates that about 10 percent of condo buyers at Portland on the Park are seasonal residents rather than year-round residents. And while that may sound like a low number, he noted that a decade ago the number of part-time residents would have been zero. “As the Phoenix area has matured, it has become much more interesting to out-of-town condo buyers,” he concluded.

Another advantage of choosing Greater Phoenix as the location for your condo — whether it’s for seasonal or year-round living — is the diversity of locations and options. For example, if you prefer a suburban lifestyle over an urban one there are plenty of choices.

One suburban option is Serenity Fulton Ranch in Chandler. Beautifully appointed condominiums ranging in size from 1,300 to 1,890 square-feet start at about $250,000, said Keith Mishkin,

owner of Cambridge Properties in Phoenix, which represents several new condo developments (including Serenity). Resort-style amenities attract seasonal buyers from the Pacific Northwest, California, New York, Chicago and other Midwestern cities, Mishkin said. He estimates that up to 20 percent of buyers at Serenity are seasonal residents.

“The seasonal buyer may want to be close to family in the area,” Mishkin said — and the Loop 101 and I-10 allow easy access across the entire Valley, as he pointed out. So a seasonal buyer can live in the part of the Valley he or she may prefer and still be less than 40 minutes away from family members clear across town, he said.

No matter whether a seasonal buyer chooses an urban or suburban setting for purchase of a condo, Greater Phoenix couldn’t be a better location.

“It’s so much easier to take care of a condo than a single-family home,” Mishkin said. “And in the Valley, a condo owner never has to worry about interior or exterior weather-proofing or snow removal like in other cities. And now, temperature control inside your condo in the summer when you may not be there is as close and as simple as controls on your smartphone. Truly, condo living in Greater Phoenix is maintenance-free. It’s perfect for the seasonal resident.”